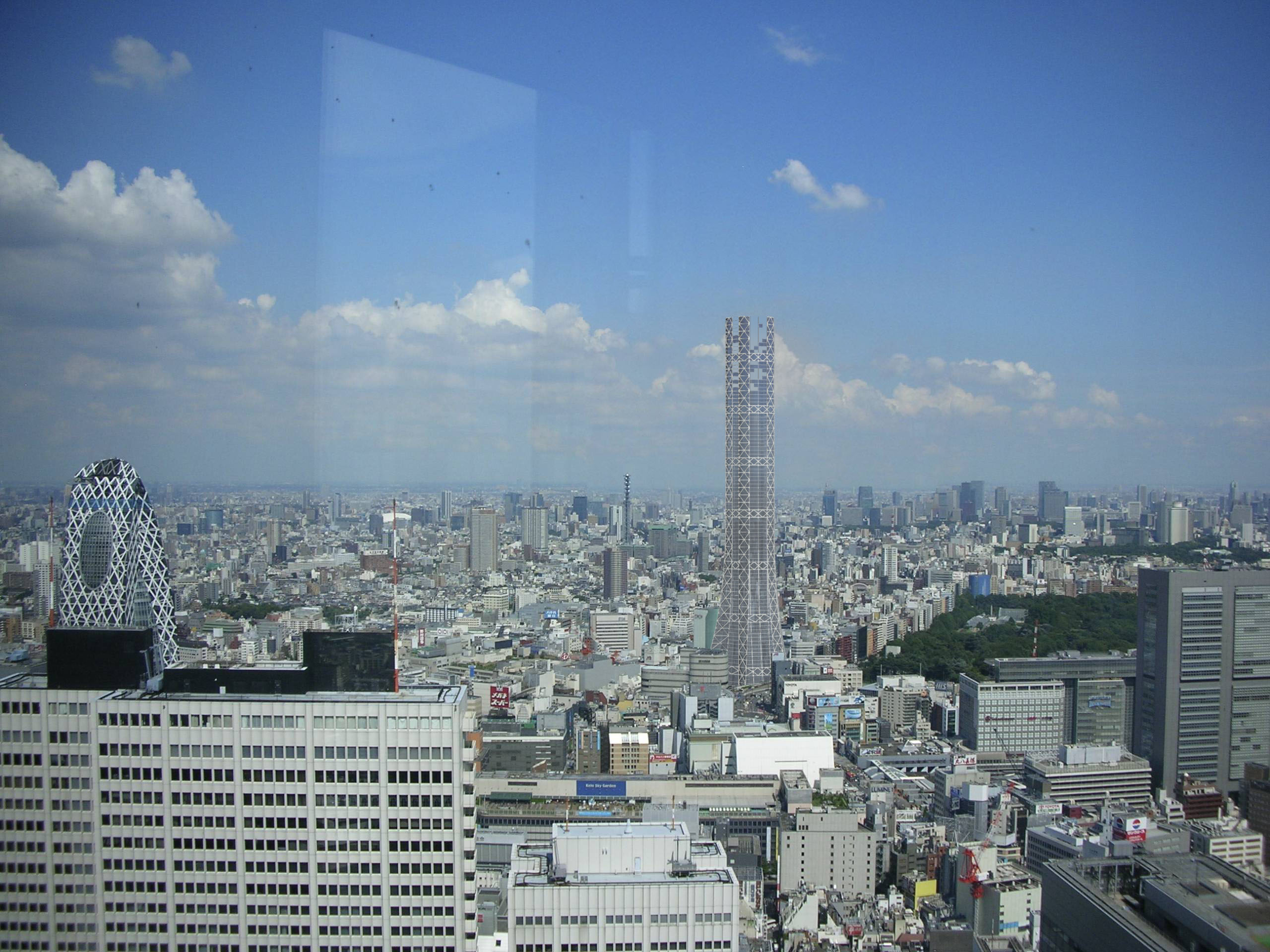 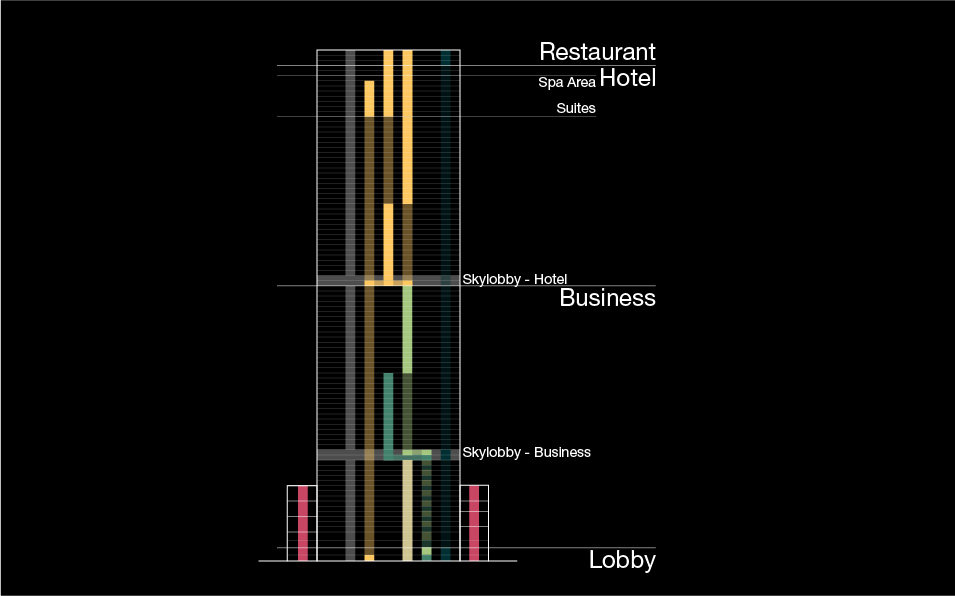 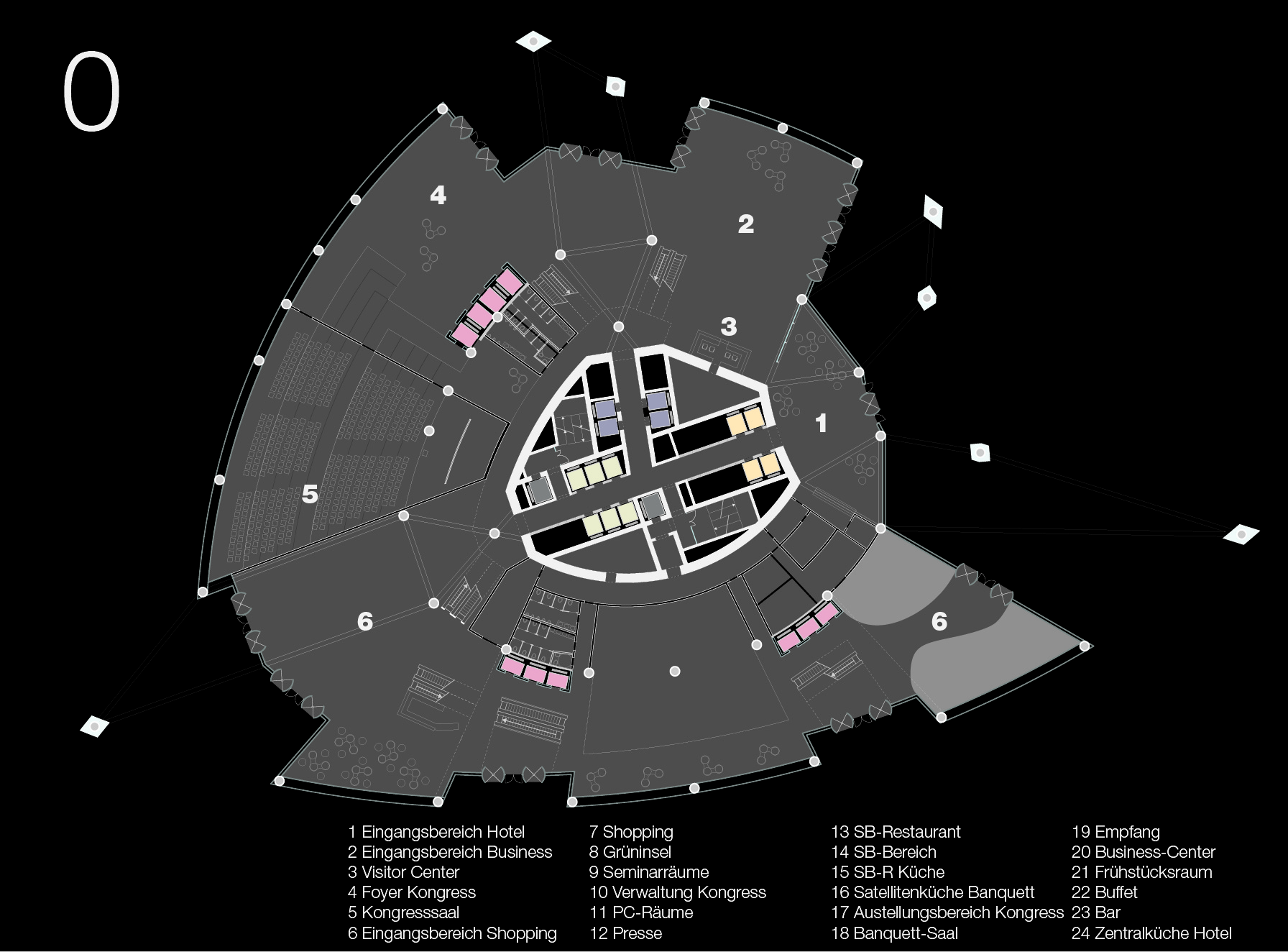 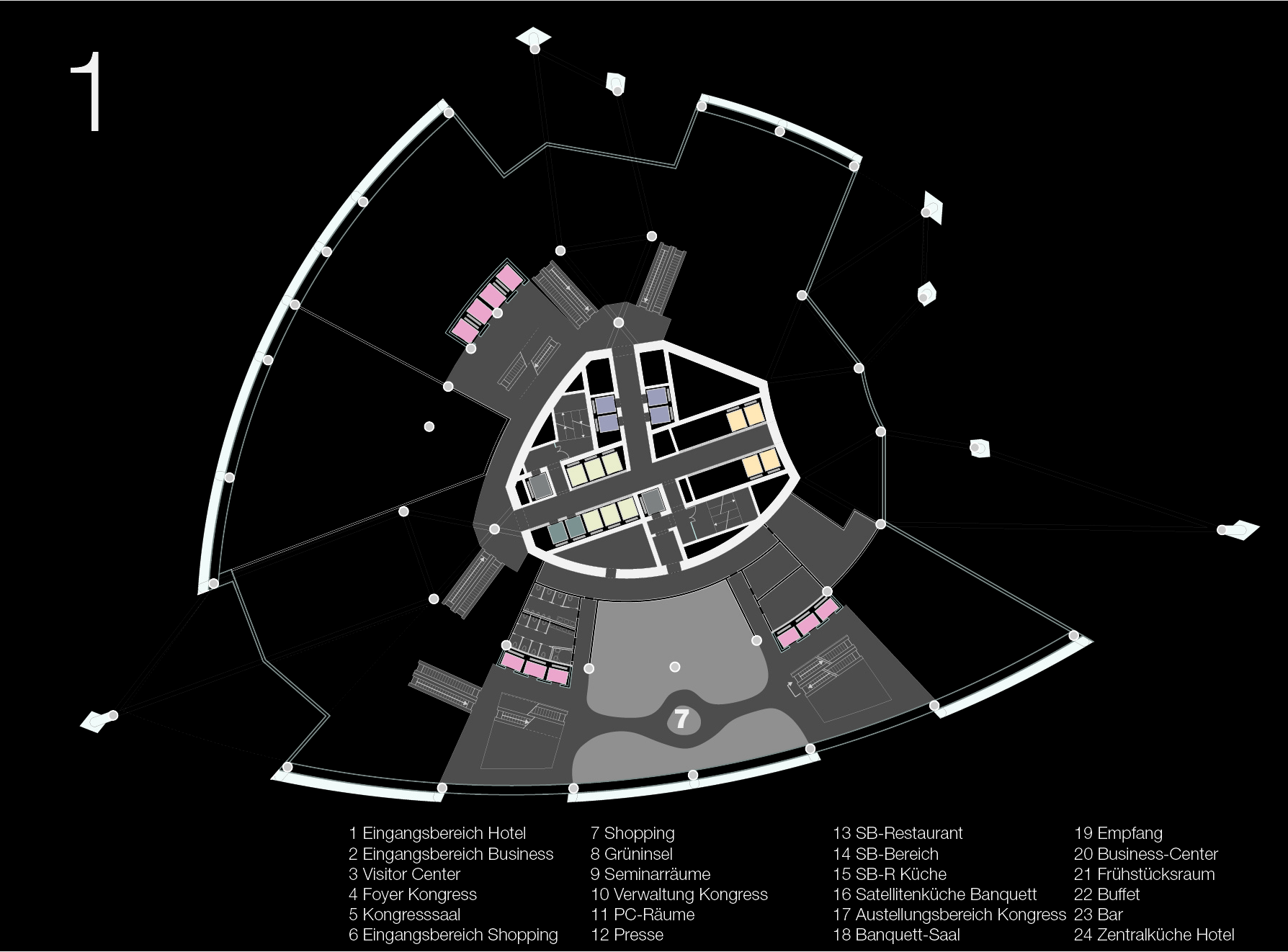 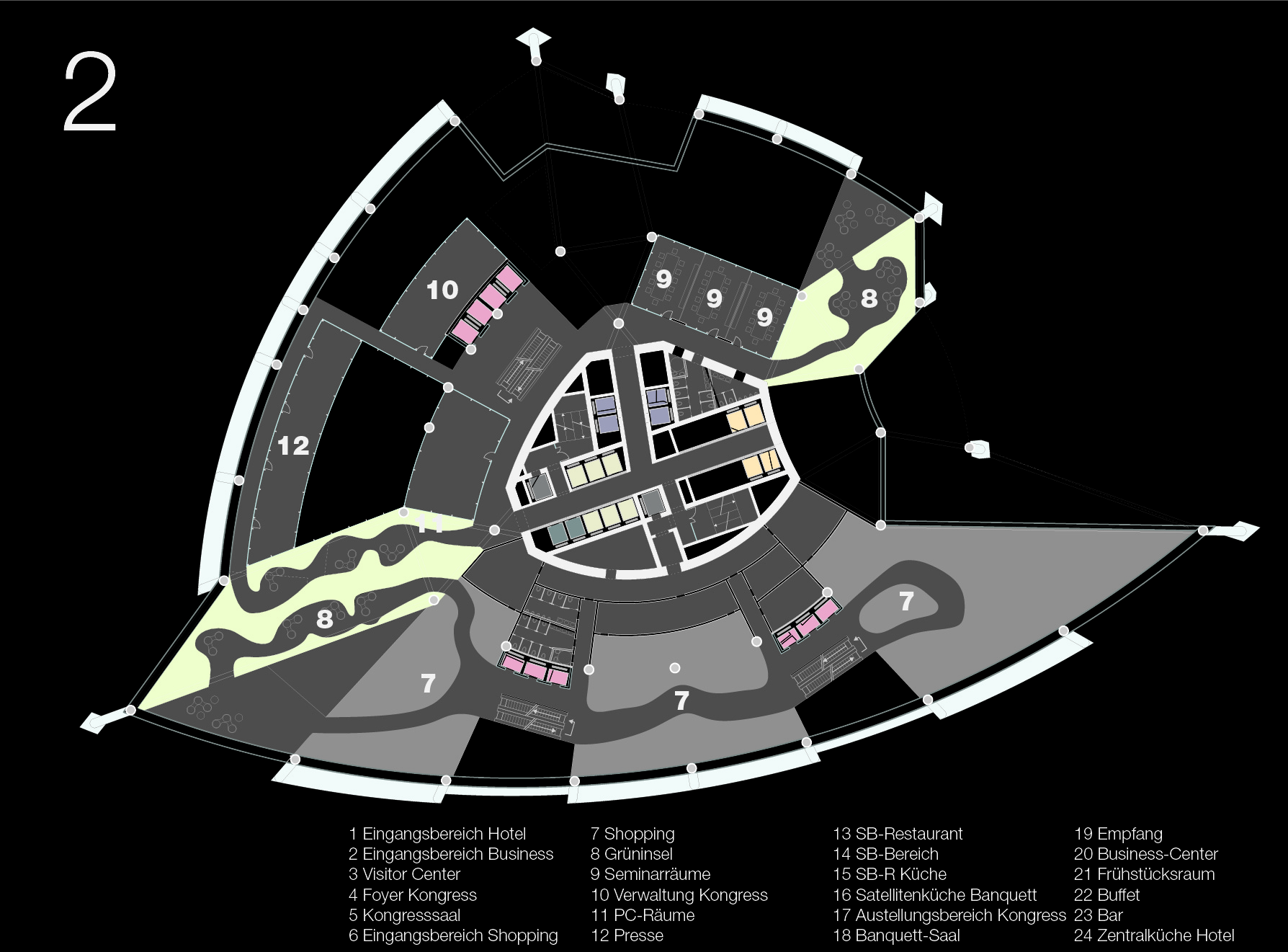 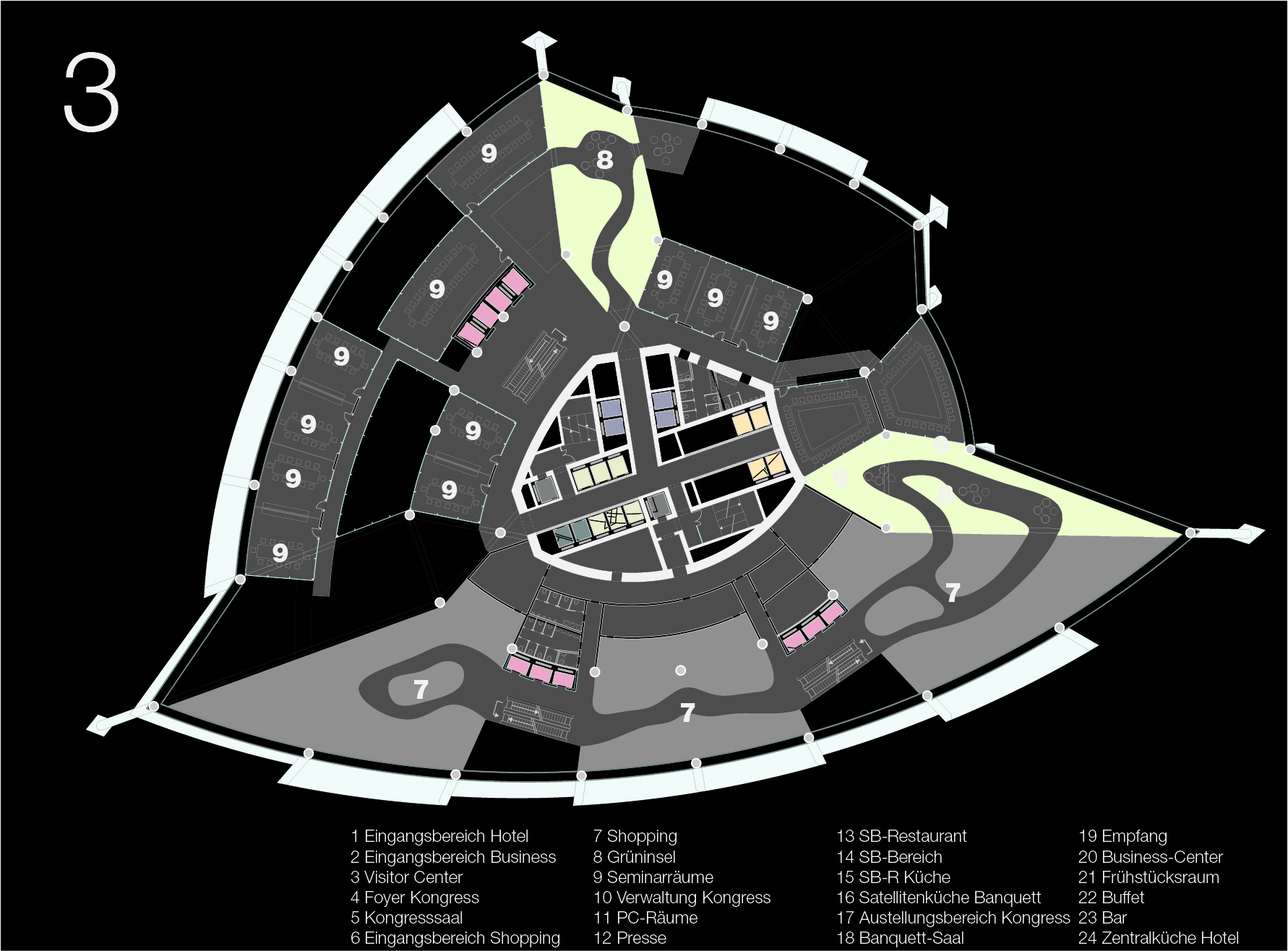 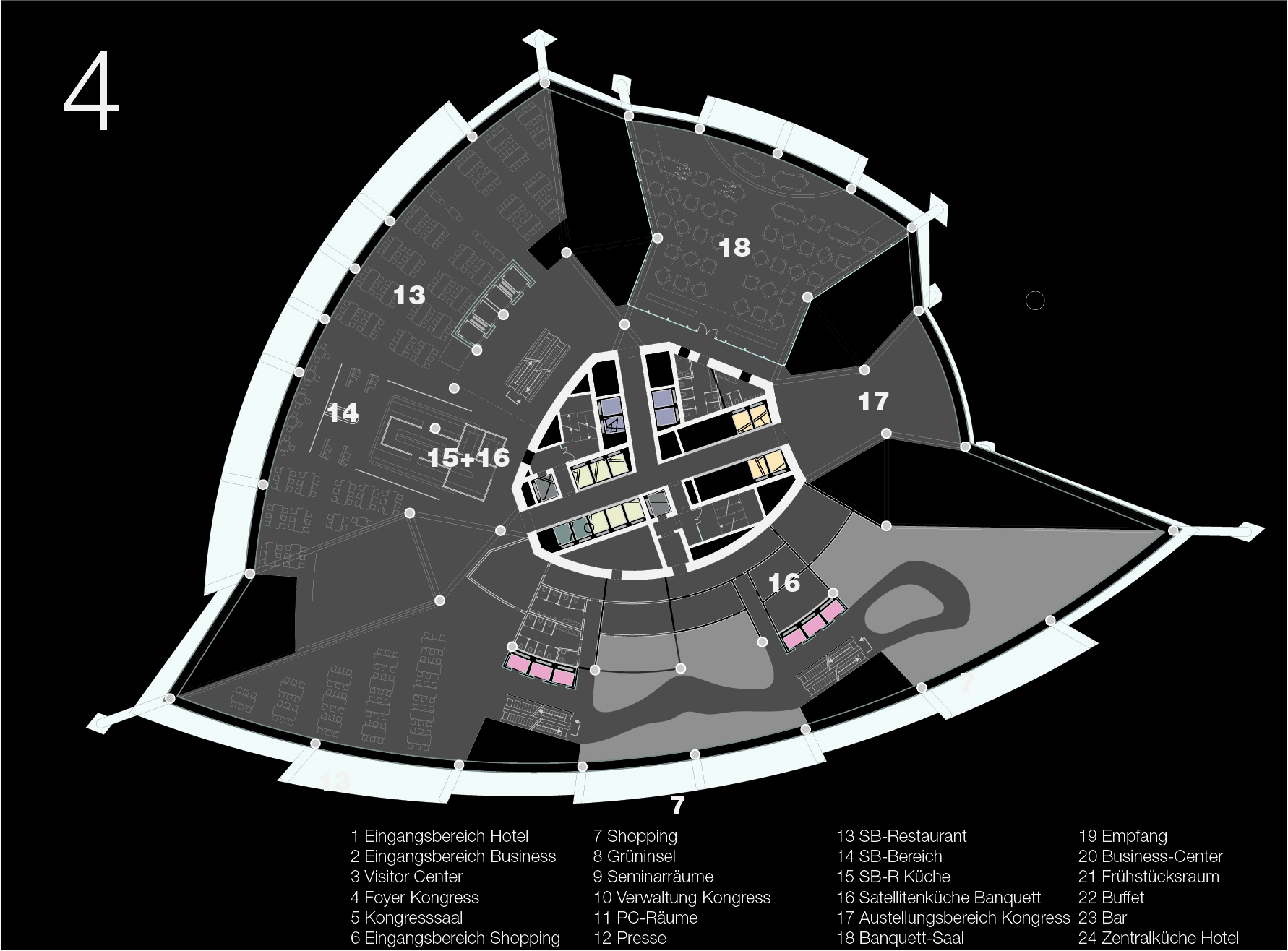 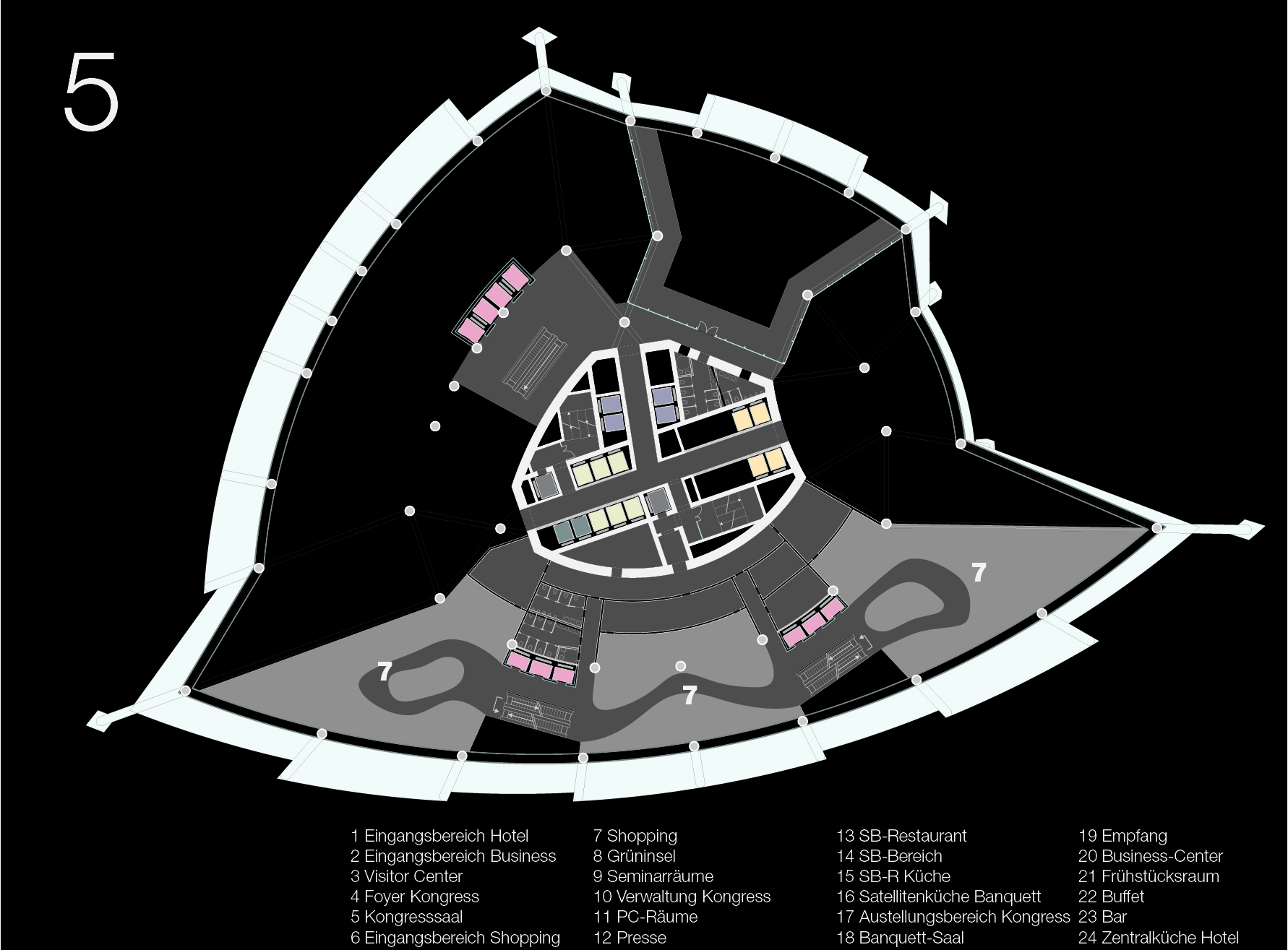 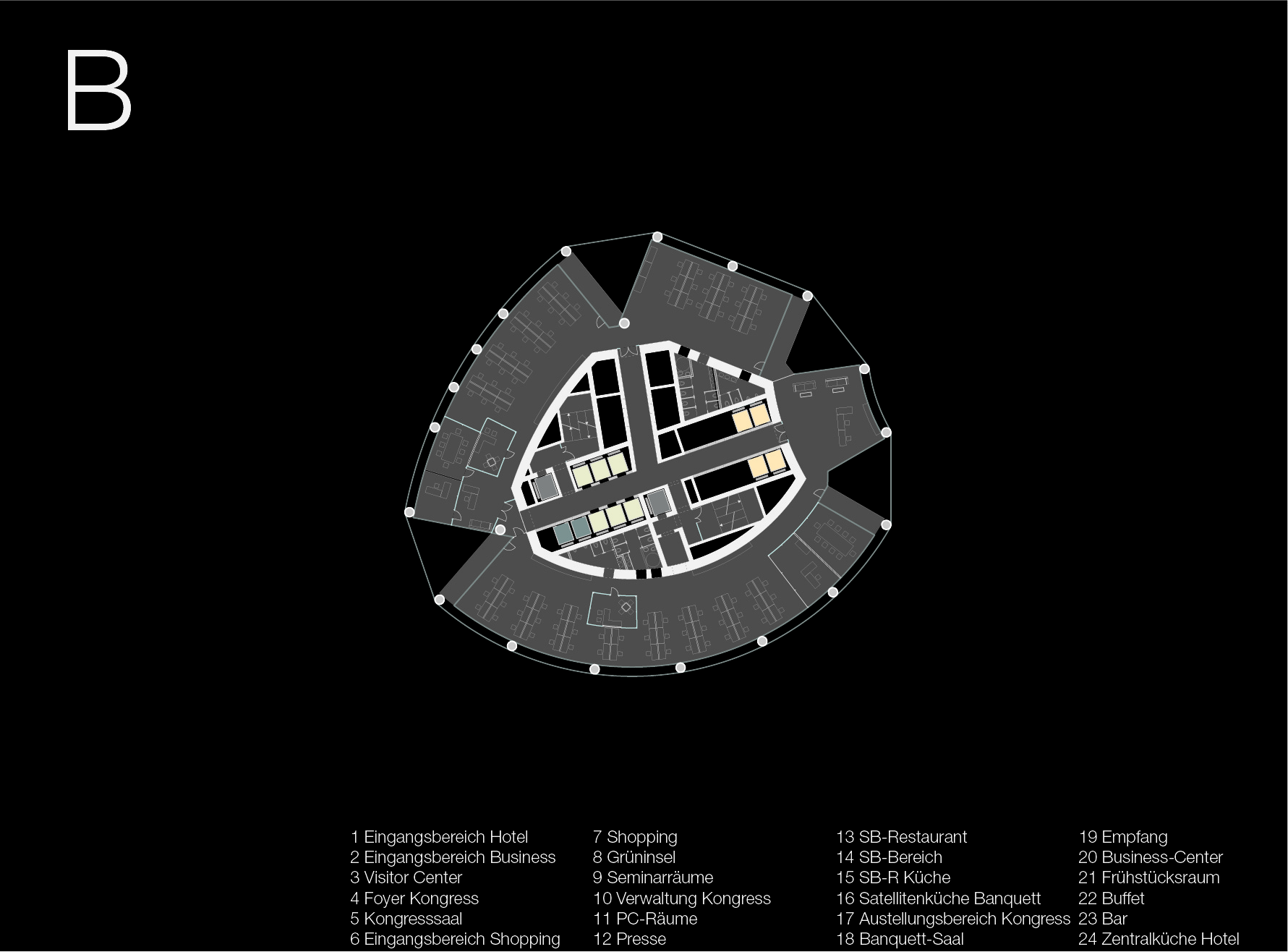 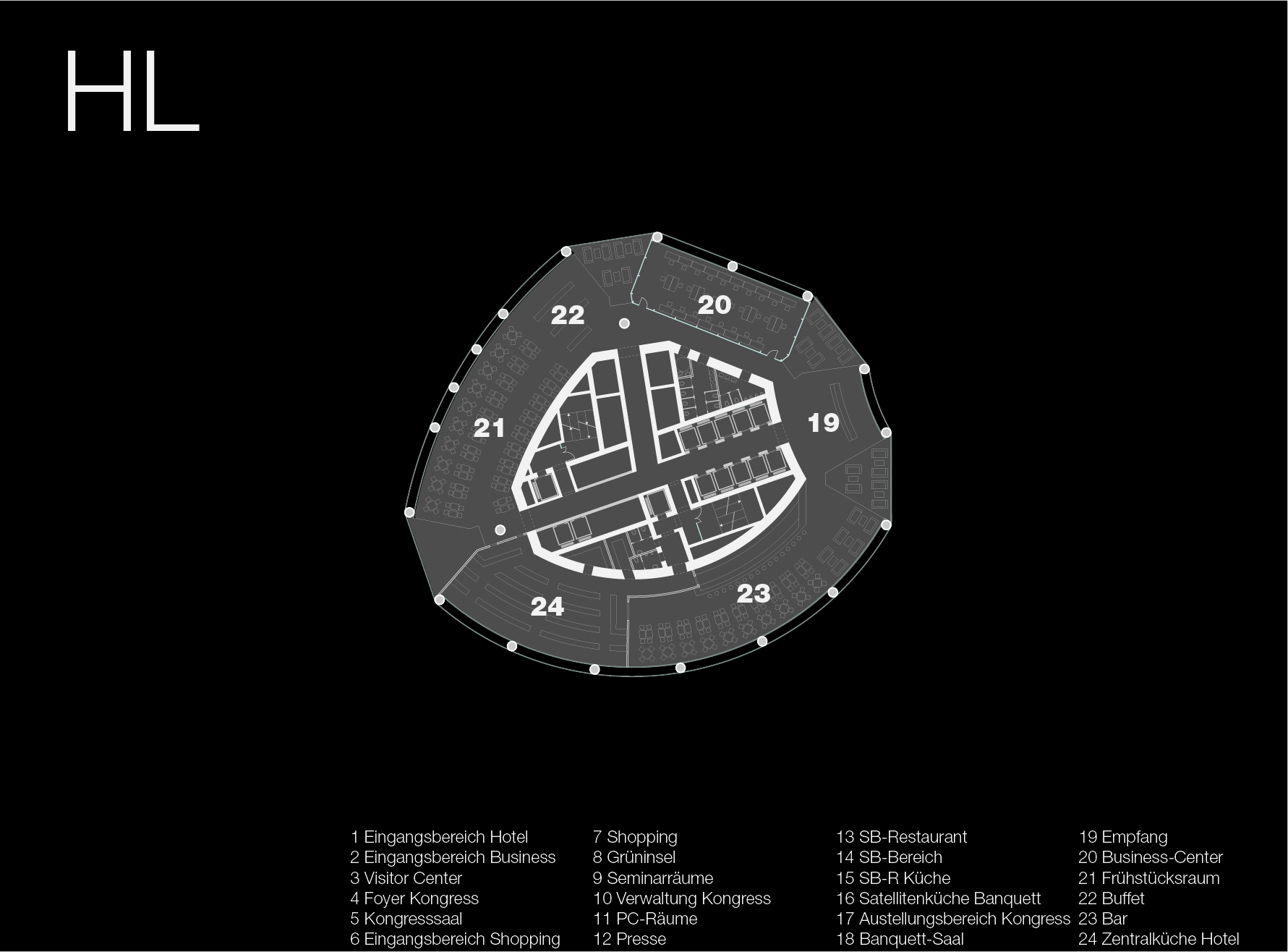 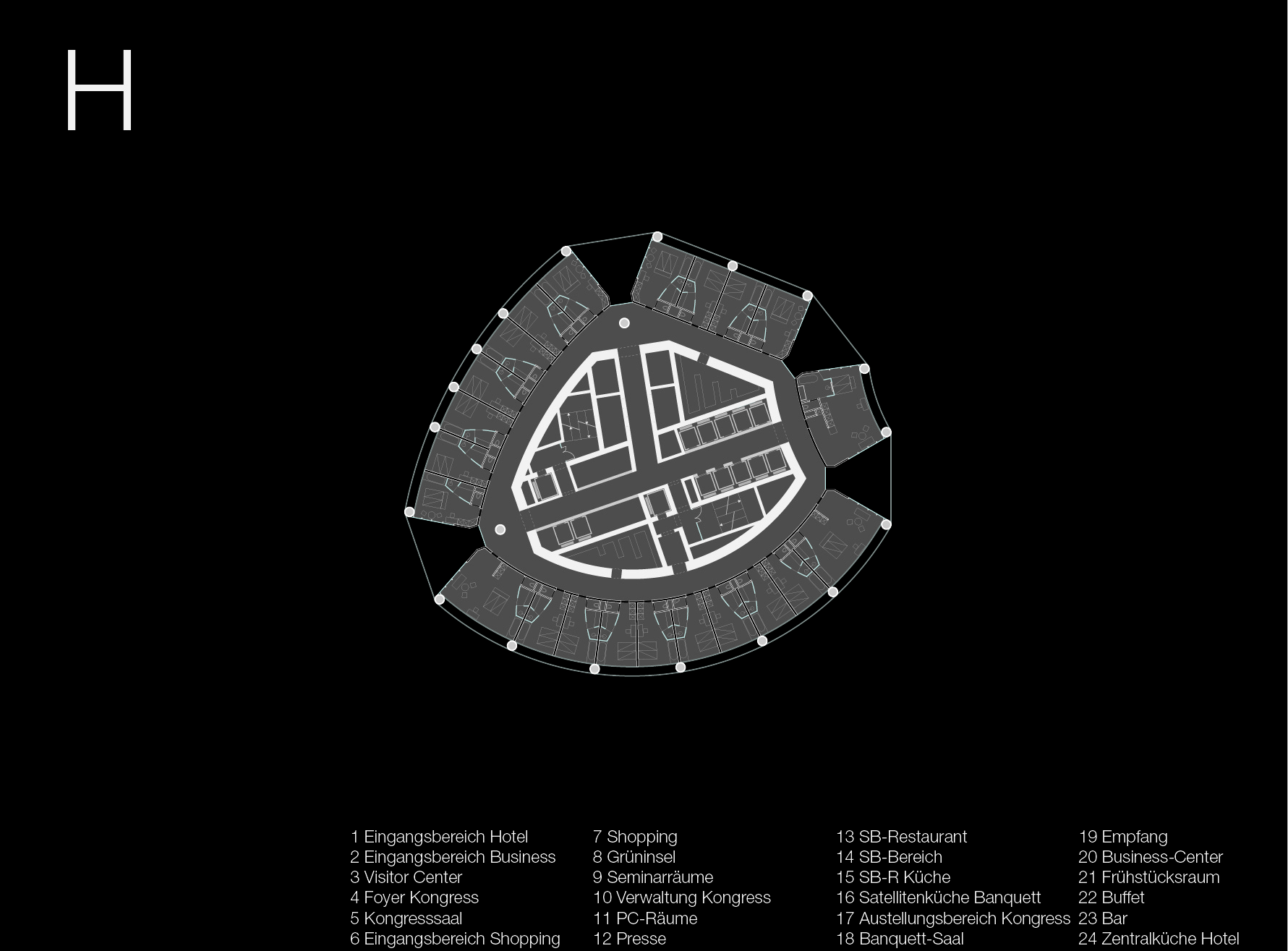 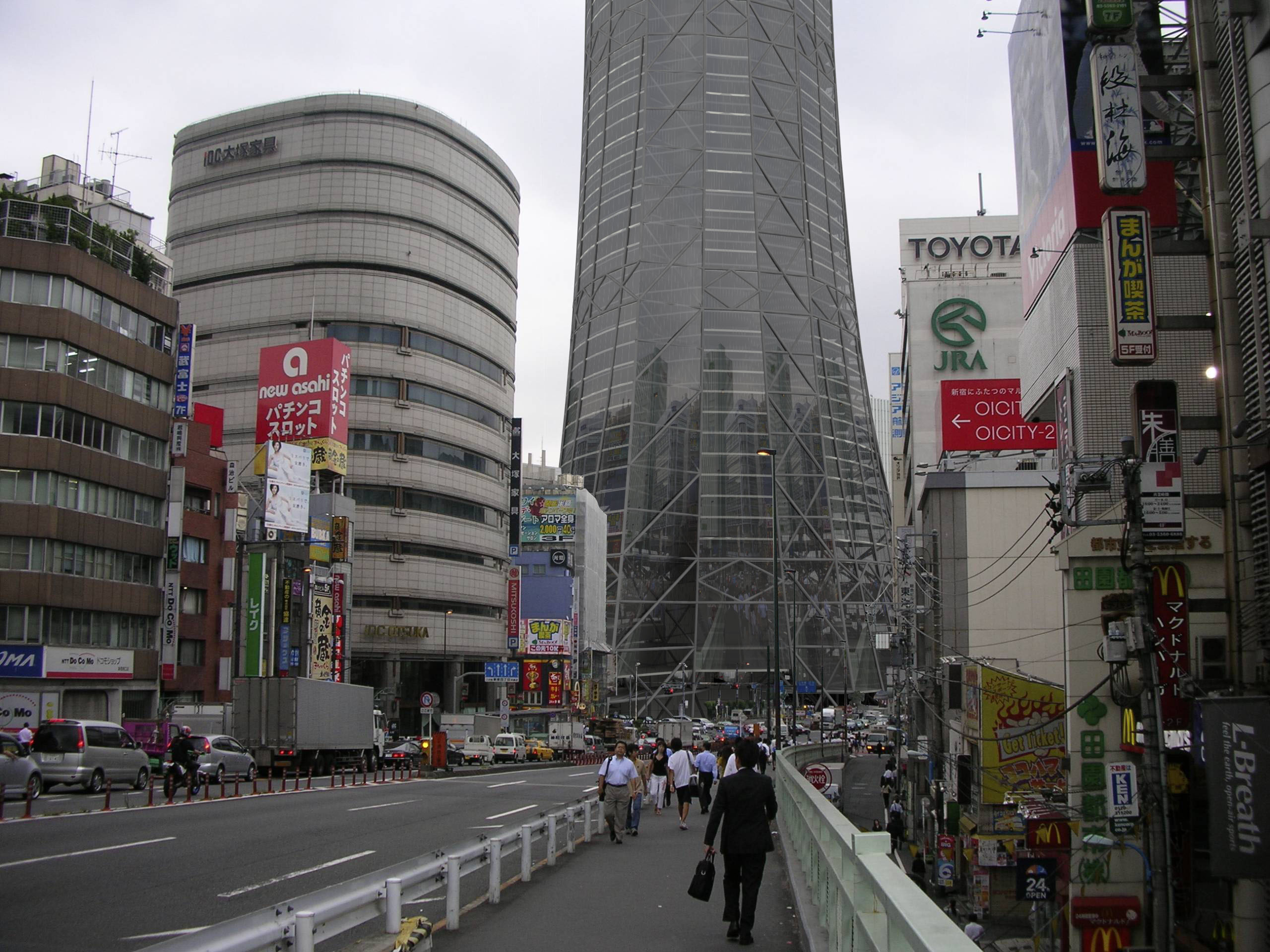 skyNoiseTower is a 400m tall signature tower. Much of the design of such a building revolves around the definition of their apex. Ever since skyscrapers have been built, the tips of the towers have always been designed as a geometric representation of people’s asiprations towards the skies, defying the laws of nature with their buidlings. The skyNoiseTower’s tip is not geometrically different from its middle part. It is though defined on a meta-level. The topmost floors of the tower exhibit a noise-like pattern of specular windows. The pattern densifies to the ultimate top where all windows are reflective. Because of that the tower seemingly dissolves in the sky making it impossible to determine where the tower ends and the sky begins for a pedestrian at its bottom.

The building’s solid core is supported by four framework-tubes. Within these tubes are large atria that house little parks on every fifth floor in a way, so that every floor has access to one of them. These green spaces aim to improve the quality of the building’s spaces and atmosphere by bringing nature as close as possible to the people working or staying in the building, while at the same time improving the air-quality in the building.

The skyNoiseTower houses four functions. A mall and congress-center occupy most of the building’s ten bottom floors. Up to the 49th floor the tower is occupied by offices and the second half above of those houses a hotel. At the top one can find public restaurants and an observation deck. The distribution of functions was chosen in such a way, that functions that cause less traffic and load—namely the hotel—are placed further up and traffic- and load-intense functions like offices, the mall and the congress center are in the bottom half.

The structure is a hybrid of two current systems in high-rise design. The first of these is an outrigger-construction. That means that a solid core, which usually houses elevator-shafts, stairwells and shafts for main installations and gives the building the ability to resist horizontal loads, is surrounded by numerous columns that bear vertical loads. The core has platforms cantilevering from it at regular intervals throughout the height of the building. These cantilevers deflect the loads from the surrounding columns into the core so that each section of the building could independently stand on one of the platforms. Additionally the connection of the inner tube of the core to the outer ring of columns adds rigidity.

The second system is called ‘bundled tubes’. That usually means, that a building consists of multiple vertical rigid framework-tubes that are interconnected, hence bundled to a rigid steel-skeleton.

Consequently skyNoiseTower’s structure is composed of a solid core that is braced by four framework tubes which are connected to it. It has seven outriggeers that connect it to the outer support-columns between the tubes. This gives the tower a broad stance and makes it very resistant to earthquakes and wind. The volumes occupied by the structural element are harnessed functionally, which translates into unique spaces within the building. As described above the spaces created by the bracing tubes house atria which gives them a double-function. This way they are designed to improve structural and functional integrity of the building.