How does a city look, where people get around using a system of small shared electric vehicles? What new possibilities would the introduction of a mobility-on-demand (m.o.d.) system in an urban context yield? How do streets change from the status quo if their main purpose no longer is to provide a pathway for cars, as we know them today? What even could be their purpose if not that? How can we shape urban space to get the most of this new transit-concept’s benefits? These are only a few of the questions that fueled our work throughout this semester.

A look at the original proposal

Our master plan for the area of Aspern Seestadt—currently one of Europe’s largest urban developments—is based on the assumption that the southern part of the original plan—mainly made up of its first phase—is already in place. We chose this as the most realistic approach, as the mentioned part is more or less already being developed.

This approach demands that our work has to, as well as come up with a valid proposal for the implementation of m.o.d., respond to the first part of the original master plan.

The reasons for our decision to abandon the original proposal at all are as follows:

1. It is very self-centered, almost like a city-center. While acknowledging that the area will be quite different from its current surroundings—as well in terms of density as in nature—we still see its function more as one jigsaw-piece between others that will undoubtedly develop around it, and might reach equal characteristics.

2. In the south the plot borders on a huge engine-factory almost one kilometer in length. In the north there is a railway running along its limits and there is a highway soon to be built along the same route. These two circumstances render the area almost inaccessible from these two sides. Additionally the original proposal accommodates two wide green stripes along its western and eastern sides. This we find to be a questionable decision as it removes the remaining possibilities to thoroughly interconnect the area with the adjacent neighborhoods. As in our eyes these possibilities to connect are the very key to sparking healthy urban development, not only within the plot but also beyond its borders, we decided to abandon this part of the original master plan. 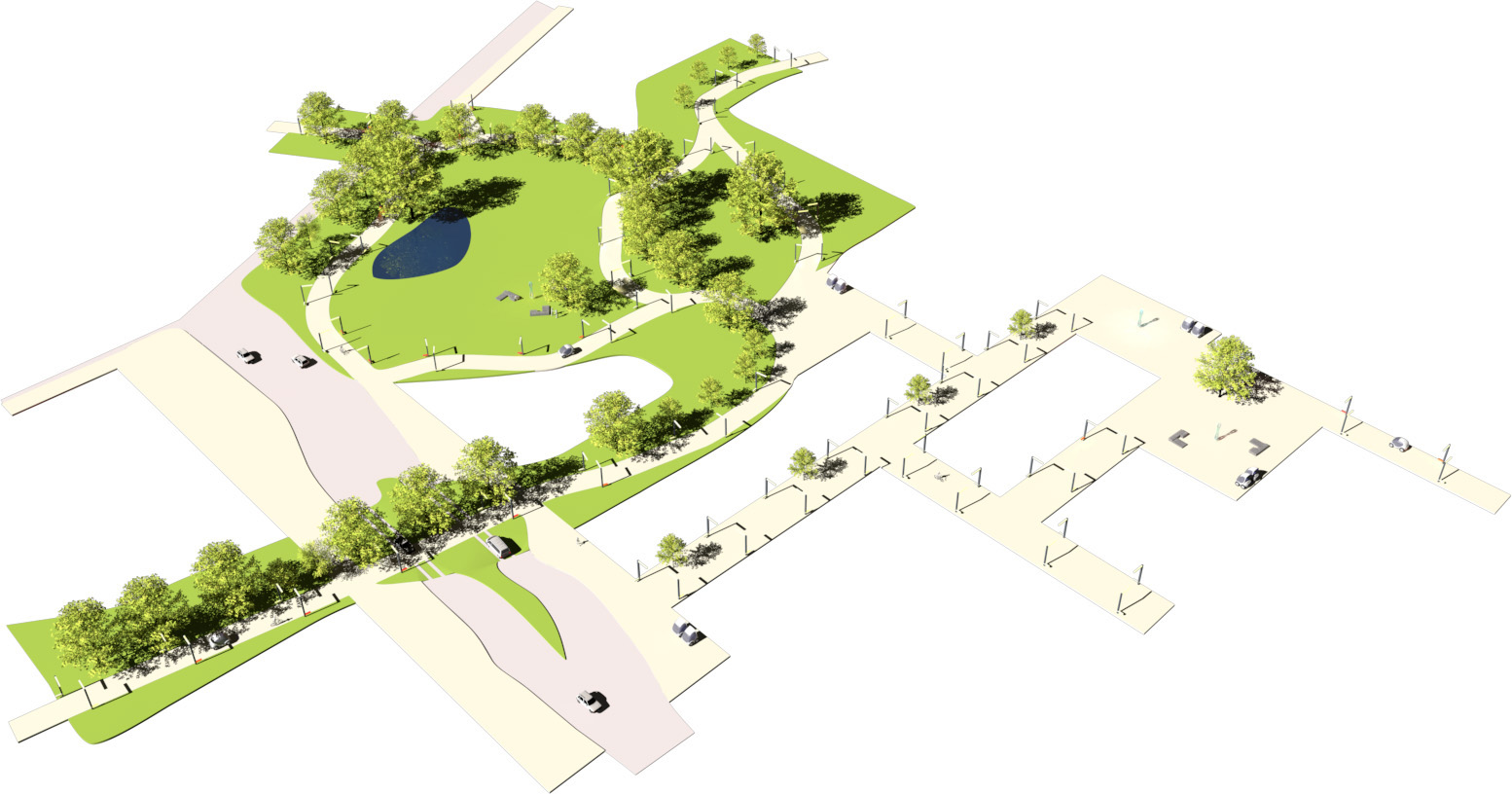 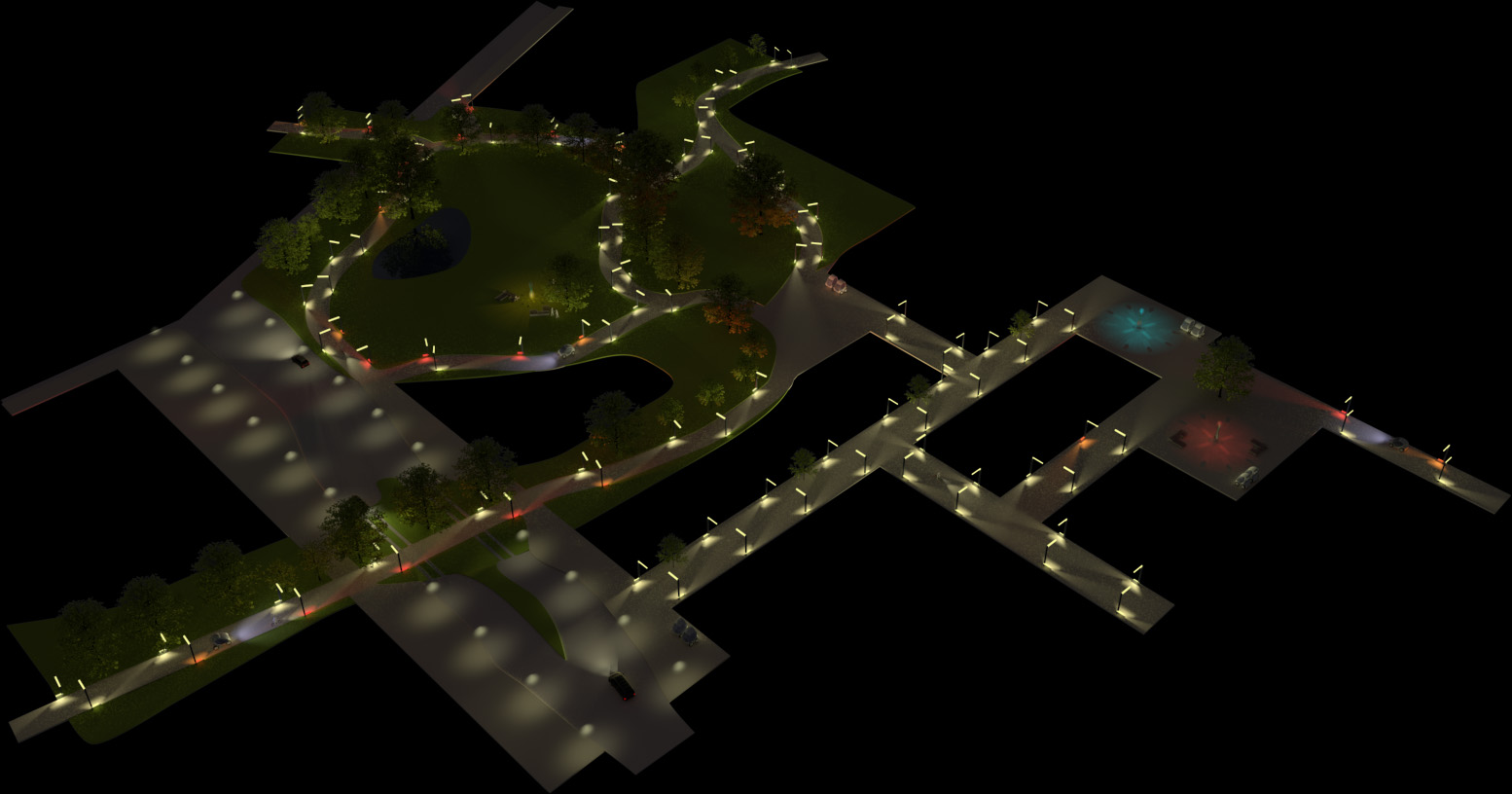 Thoughts on mobility on demand

The key characteristic of the mobility on demand system at hand is that it behaves very network-like. The m.o.d.-streets are the cat5-cables, routers and switches of the city. The charging stations are the counterparts of network-sockets and Wi-Fi-hotspots.

To increase the system’s efficiency we think we have to create a dense network of streets. Its efficiency is determined by how fine its grain is. 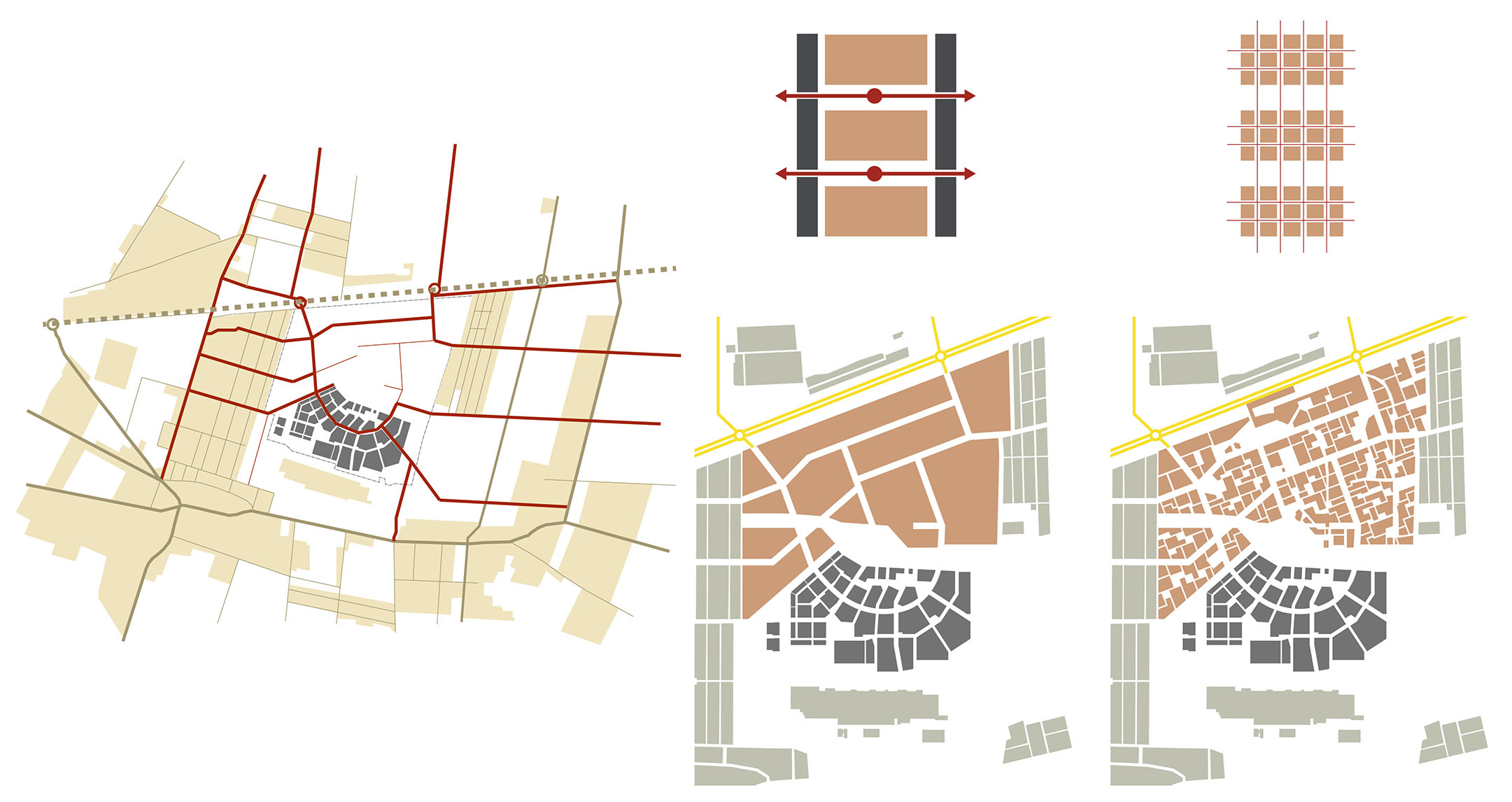 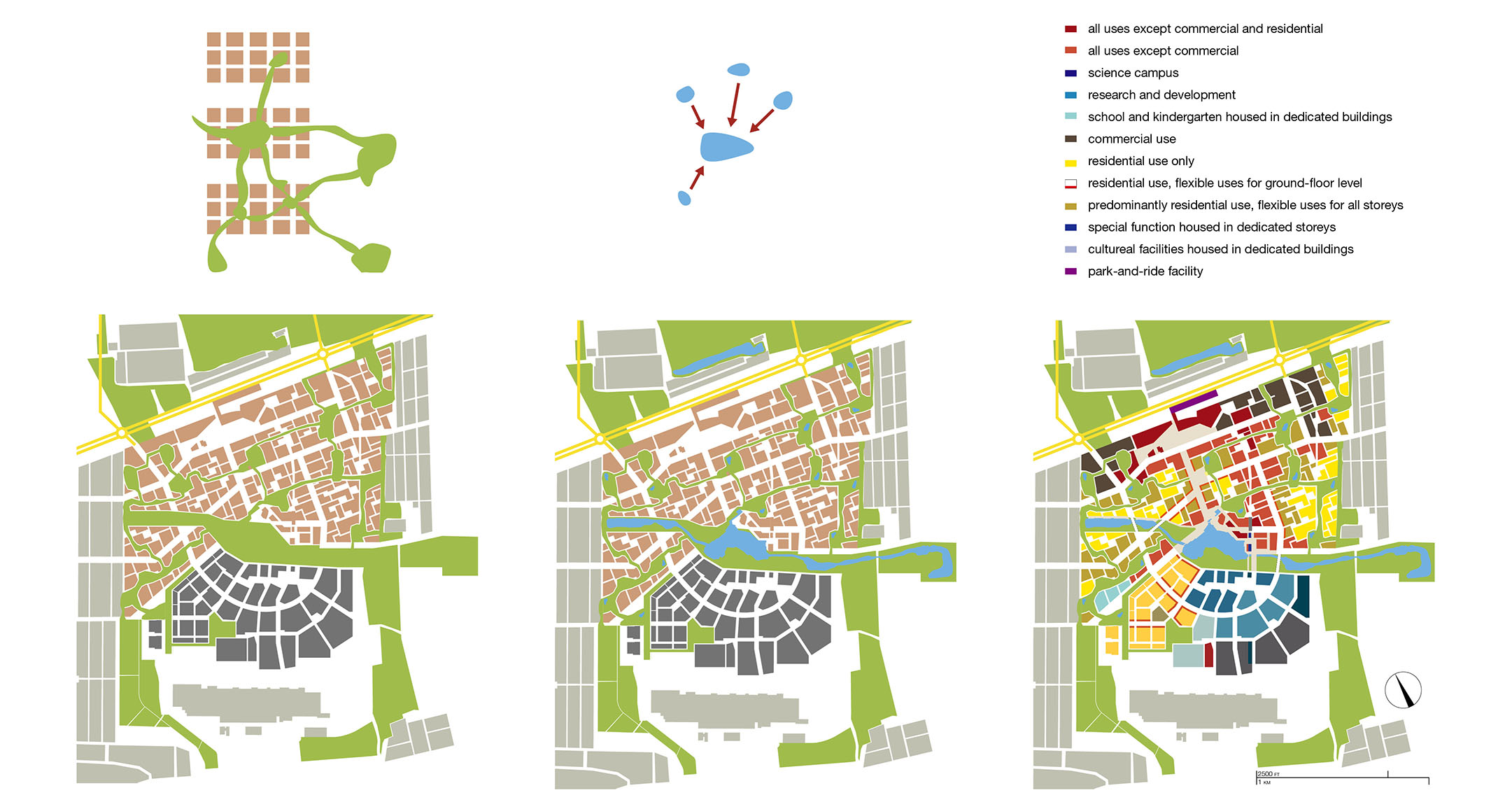 For our design we chose to superpose multiple layers of networks. Our first and most conventional one consists of quite common streets that are laid out in a way so they interconnect the surrounding areas’ main streets to our plot. Although the possibility exists to drive through the plot, those streets are focused on making it possible to only access the area with a usual car, but not so much on making it possible to get around within it, hence this first layer’s network’s rough grain.

The second layer we apply stands in hard contrast to the first one through its very fine grain of streets. It creates a dense spatial network within the blocks that the first layer cut out of the area. This layer provides space for every means of transportation but cars or trucks.

As the internal workings of the blocks are still not connected to each other, we add a third layer. It contains a green network of linear parks that cut through all the layers below. They are the green arteries of the city that connect the divided shared spaces with linear shared space lanes within them.

During our work we also picked up another issue of importance to the area. In Aspern there is the problem of sinking groundwater levels.

We responded to that problem by proposing a system for rainwater recycling. The water from roofs and streets is to be collected in small natural cleansing ponds. These we have distributed all over the area. They are situated in all of the little parks within our green network. The flora and fauna inhabiting these little pools is cleaning the rainwater before it is passed on to the main lakes in the middle of the building area and thus to the groundwater.

This method of dealing with the issue at hand, adds yet another aspect of sustainability to the new city. 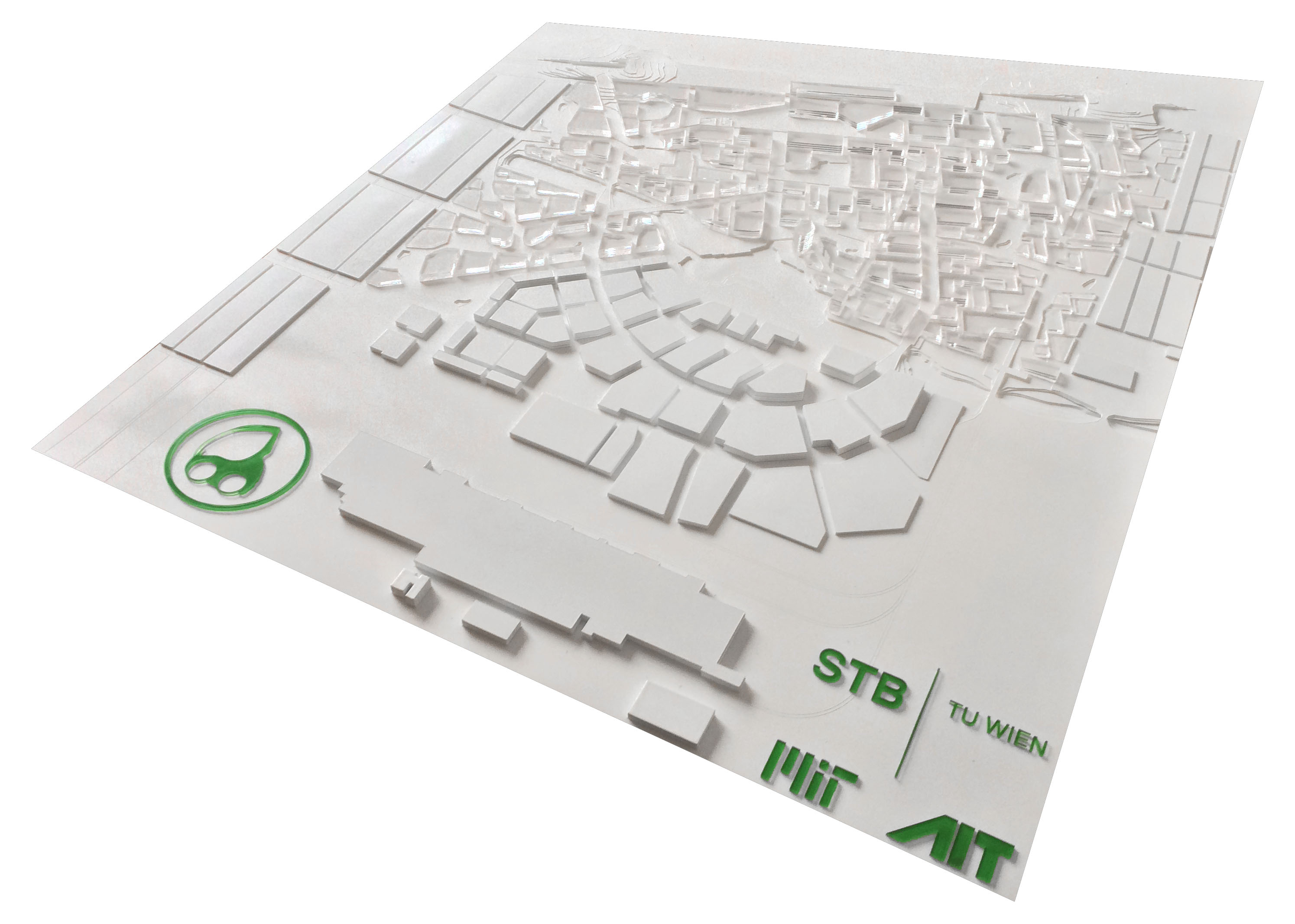 For our fine grained spatial design to function correctly we need to apply a special concept of shared space on it.

The m.o.d. network is assumed to be to some degree self-aware, so that it can redirect and evenly distribute all traffic over all the available pathways. As within our proposed web of small streets all connections are highly redundant, the e-mobility system has a great number of options for doing that at its disposal.

This causes the system to be very unlikely to jam as for all the redundancies within it. Just like the internet where traffic can be easily redirected so it hardly ever breaks down.

Another effect, which is even more important, is that traffic can be distributed very widely. This results in a very low volume of traffic on each one of the individual streets, which are as they are shared space at only one level, meaning they are not supposed to have separate sidewalks or cycling lanes. The reduced traffic-volume solves many issues of safety and ease of use for other partakers of traffic like pedestrians or cyclists.

Within this system it hence becomes possible to realize a paradigm shift in how we look at traffic and street-design. Shared space can be designed mainly for pedestrians and non-motorized forms of transportation. Like before the implementation of the automobile the walker can regain his status of the street-user of highest priority.

For our shared spaces we came up with another idea, based on a concept by South Korean architect Daekwon Park, who is studying at the Harvard Graduate School of Design at the moment. He invented a public lighting device, which would change its light according to the presence of passers-by or twitter-posts about the safety situation in the area where it is deployed.

We propose a street lighting system that by using special sensors is aware of approaching m.o.d. vehicles in shared spaces. It could make pedestrians aware of the proximity of nearing vehicles through a change in the color of its light, hence reducing the likeliness of accidents within shared spaces. Or to further enhance the comfort of people roaming the streets in designated areas this device’s polarity could be reversed to signal the presence of pedestrians to drivers advising them to exercise special caution.

Mobility on demand systems can yield far reaching opportunities, allowing to revolutionize the design of cities. If used right it could make smaller scales more efficient and by that turning around current tendencies towards ever bigger and taller buildings. It could bring back a more human scale to cities. Make cities more livable.