It is a promising concept for future urban design to create walkable self-sustained city-cells. Such an urban pocket should be small enough in size to make it possible to reach any point within by walking. Self-sustained means that one can find all necessary facilities for daily life within the cell. Ideally there should be as many people living within such an area as there are working. Connections between the many pockets of a city could be conveniently achieved through public mass-transit. The aim of this notion is to allow people to live a car-free life and our cities to stay places worth living in.

This project looks into two techniques for creating such cells. Firstly for quick modeling LEGO bricks are used to prototype designs. Secondly an algorithm is used to generate urban-cells along defineable parameters. Consequently it is possible to try out and evaluate a high number of different configurations, while looking for suitable solutions. It allows us to conduct experiments, investigating how much can be achieved and where boundries are. 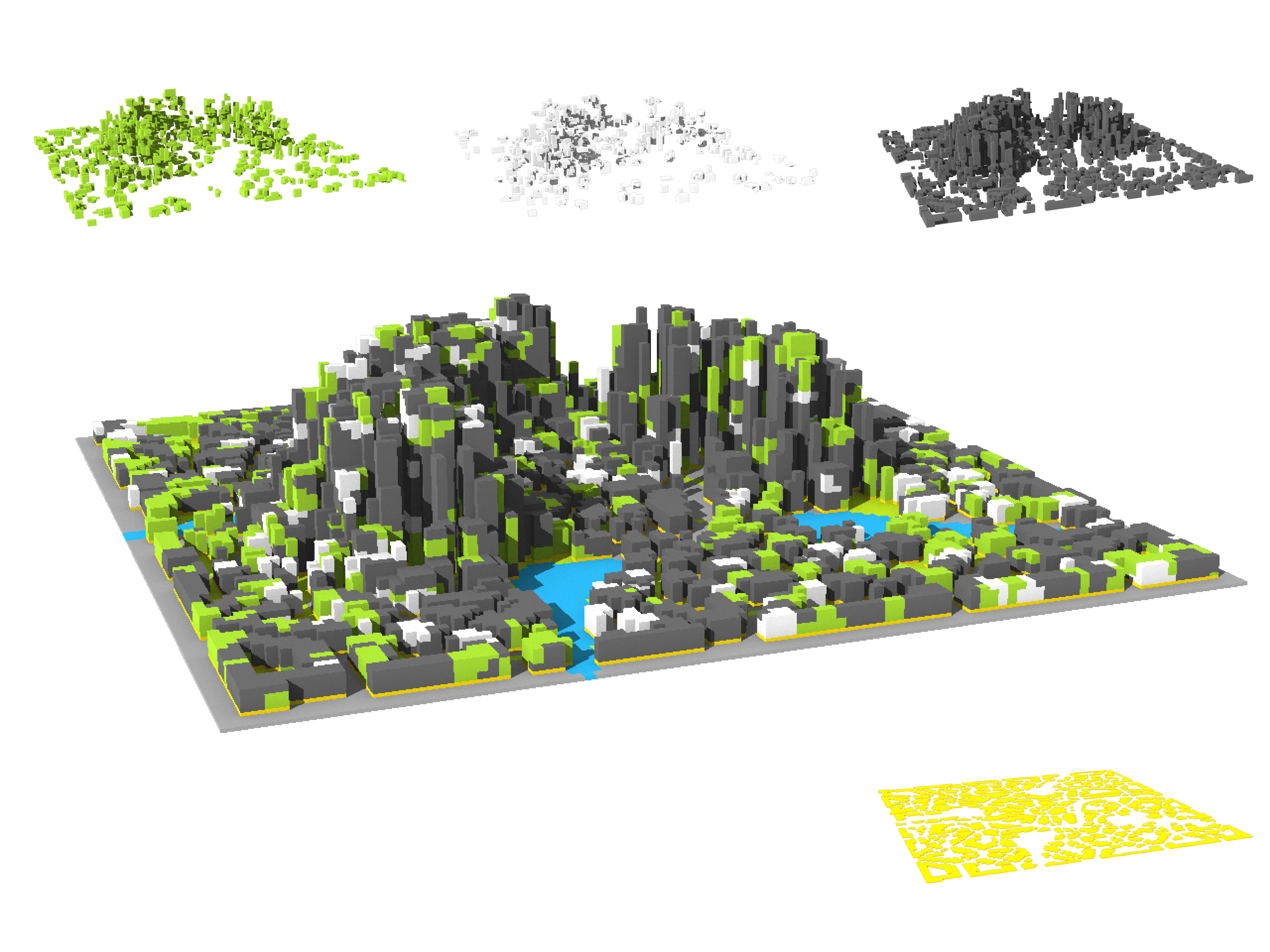 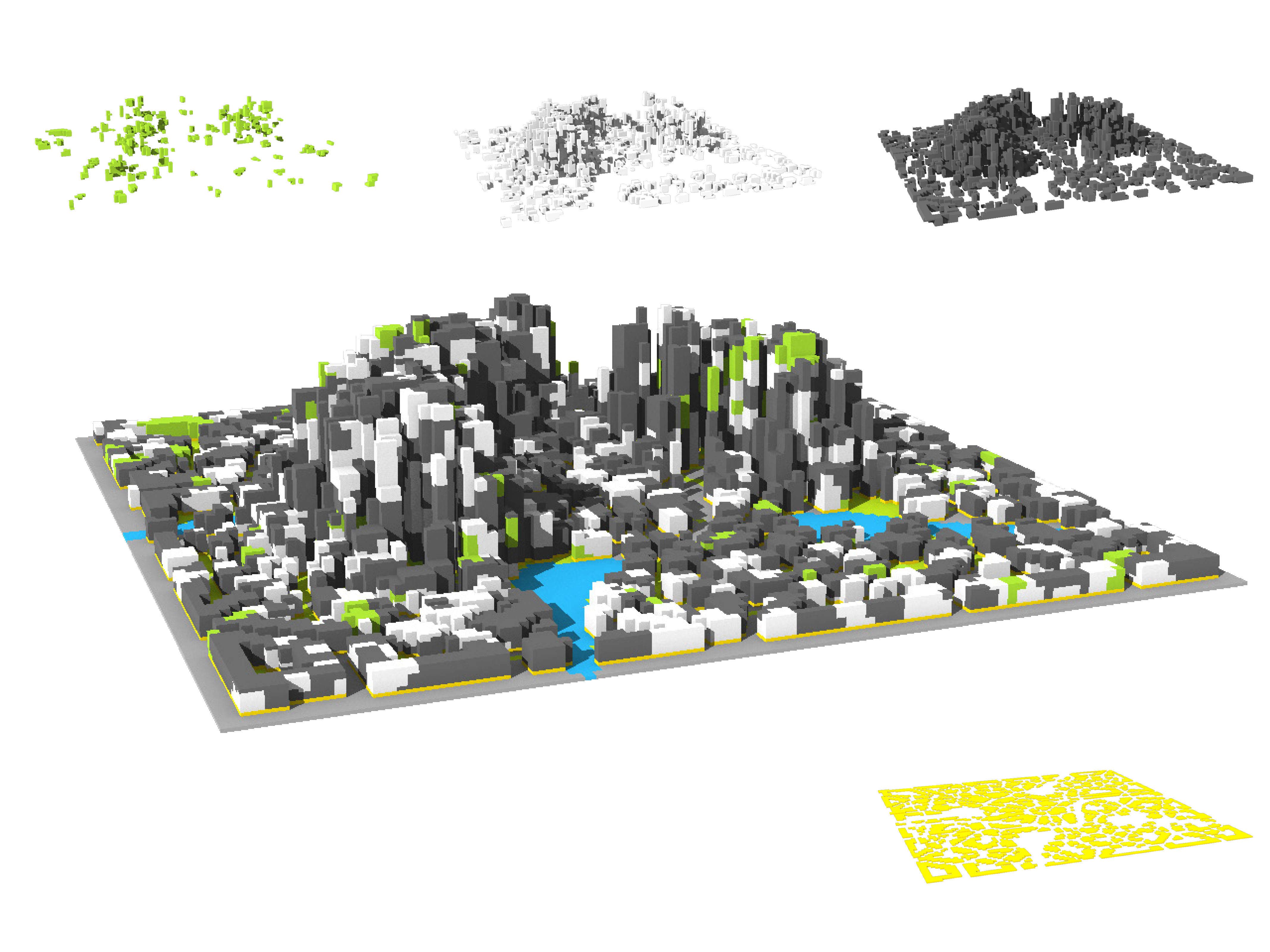 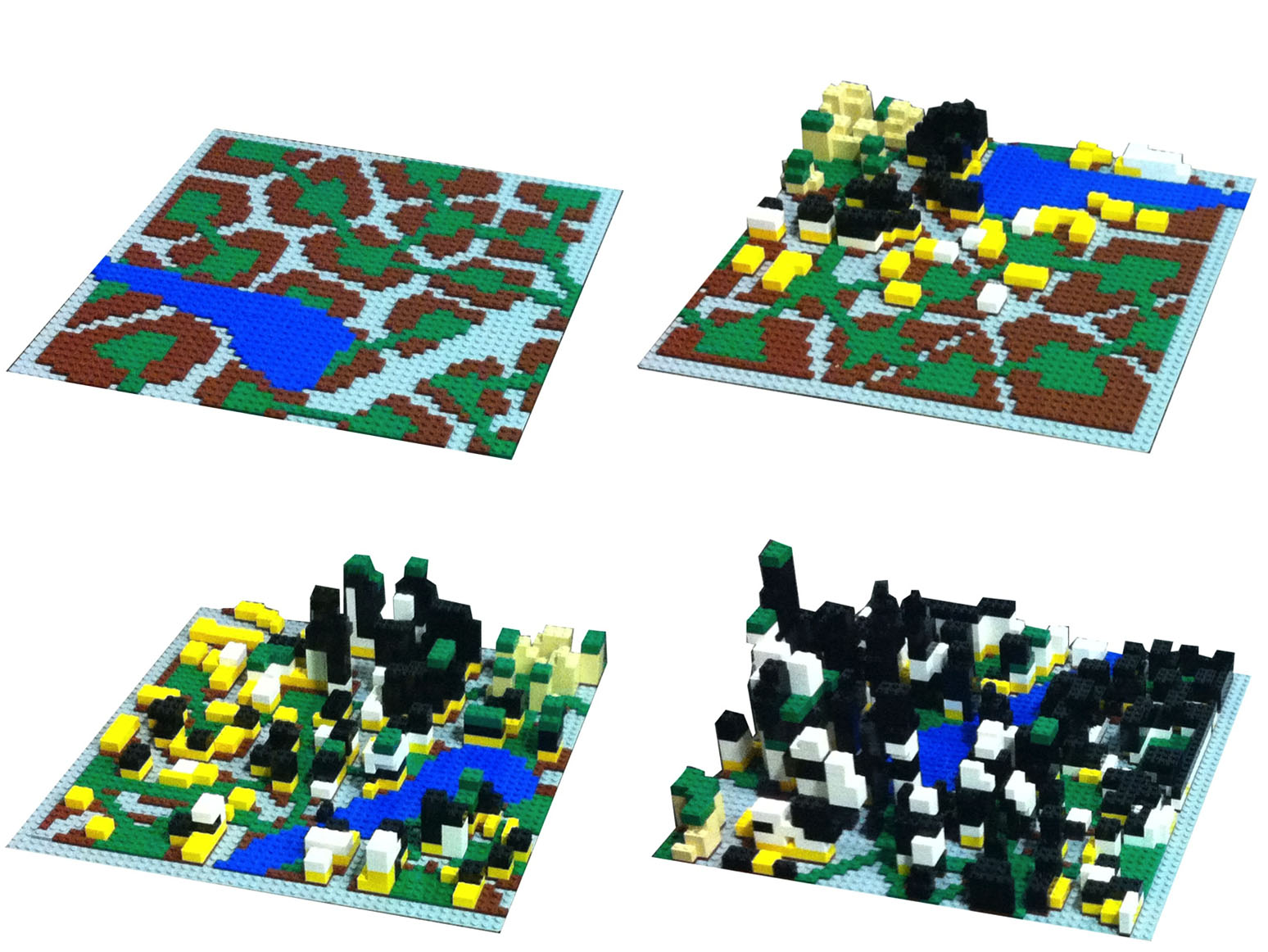 Air-o-ponics are the latest development, when it comes to innovative concepts to efficiently grow produce. The technique is powerful enough to generate enough fruit and vegetables for one person on a footprint of just a few square-meters. Hence it makes possible to provide food for an urban population from within a city, radically cutting the distance food has to travel between production and consumption, dramatically reducing our lives’ carbon-footprint.

The aim of these efforts should be a net zero calorie balance. Each city cell should produce as many calories in food as are consumed within it. This sounds like science-fiction, but would be possible with this new technology at grand scales. At the same time this would mean a great additional number of jobs in the city.

With the developed algorithm it was possible to quickly try out how far we can take this urban food production, at least theoretically. Pictures on the right show two different configurations, one of which showing the necessary volume (in green) to cater to one urban cell, the other even experimenting with producing enough calories for 4 cells of the same size.

Throughout the process of the project LEGOs were used to build concept models. The ability to interact with the model in a way so familiar to us as putting together LEGOs, tears down many mental boundaries between urban planning and non-urban-planners. The benefits are a better discourse during the planning process, which relies on input from many disciplines and all the people involved in it. 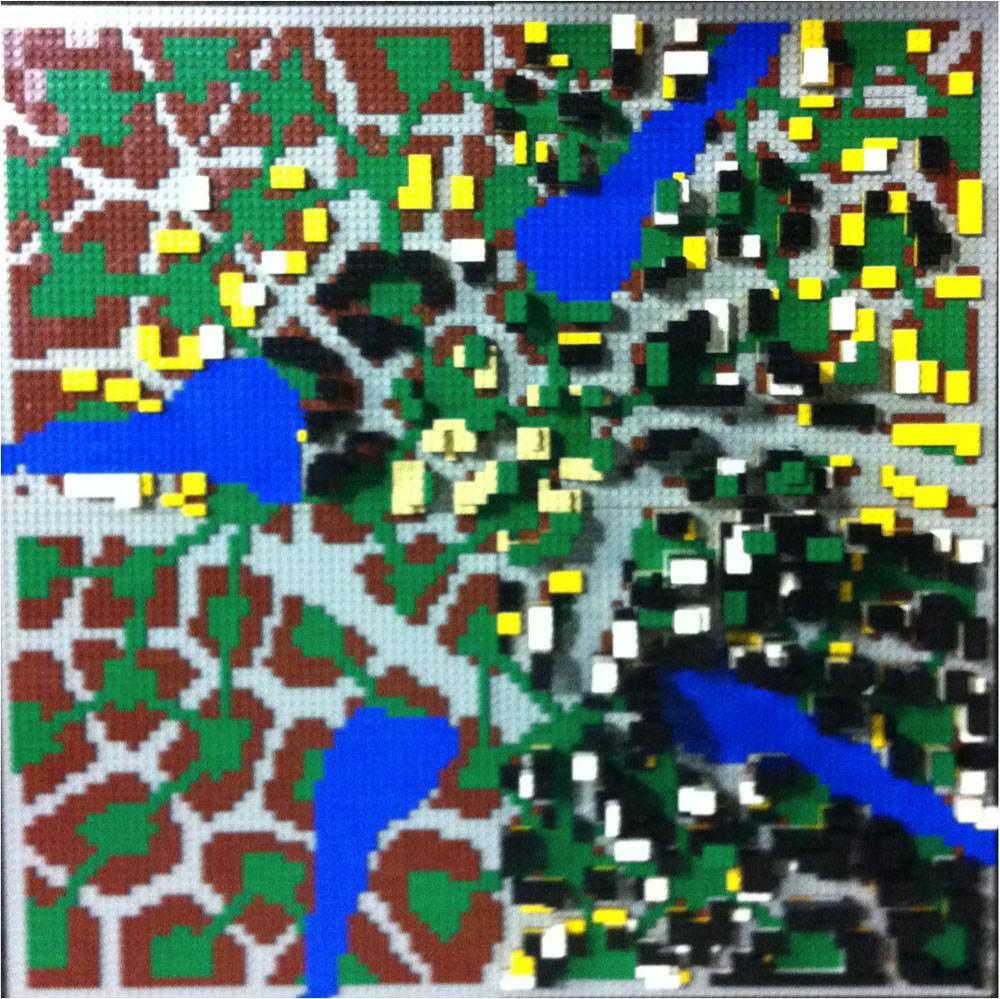 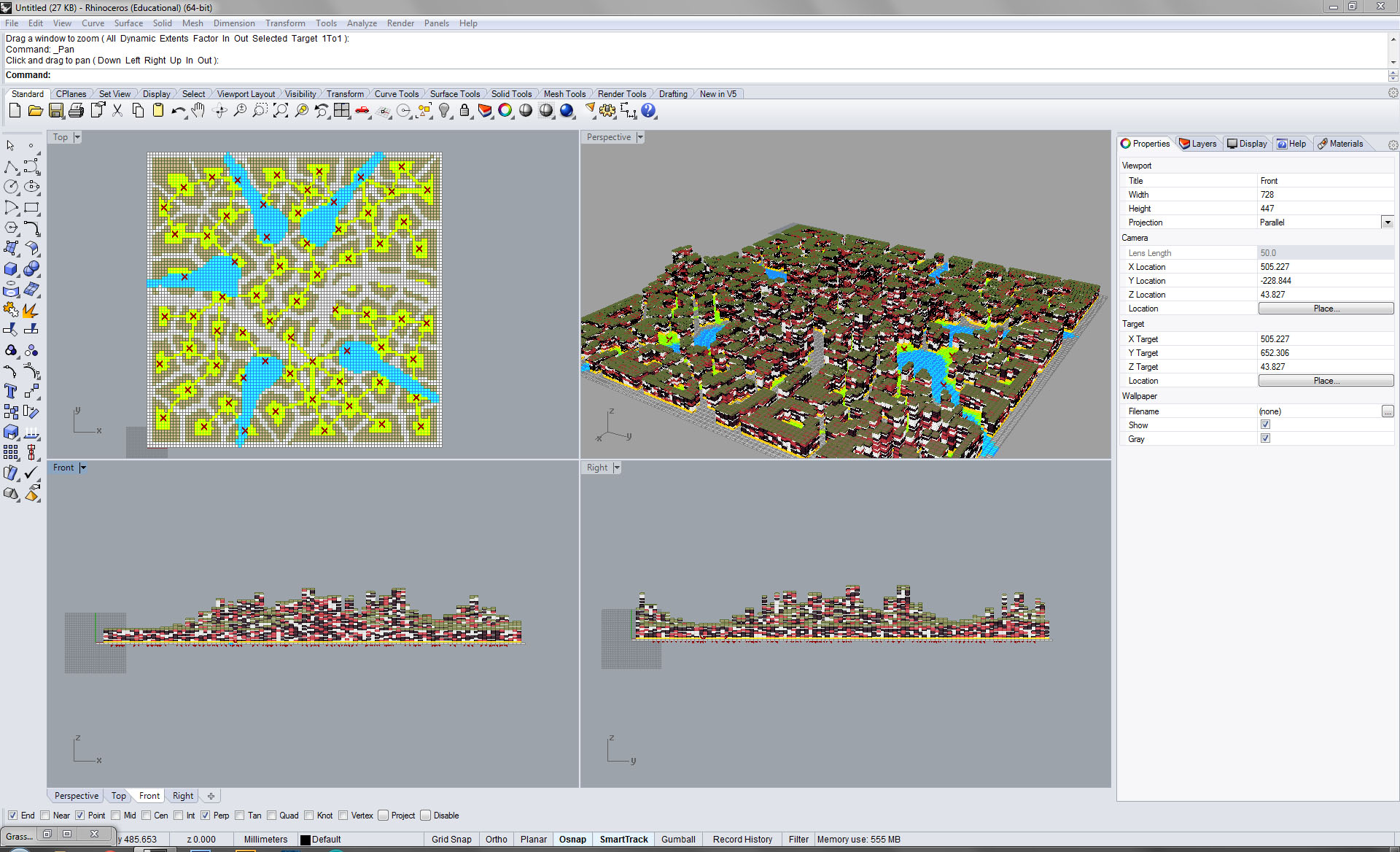 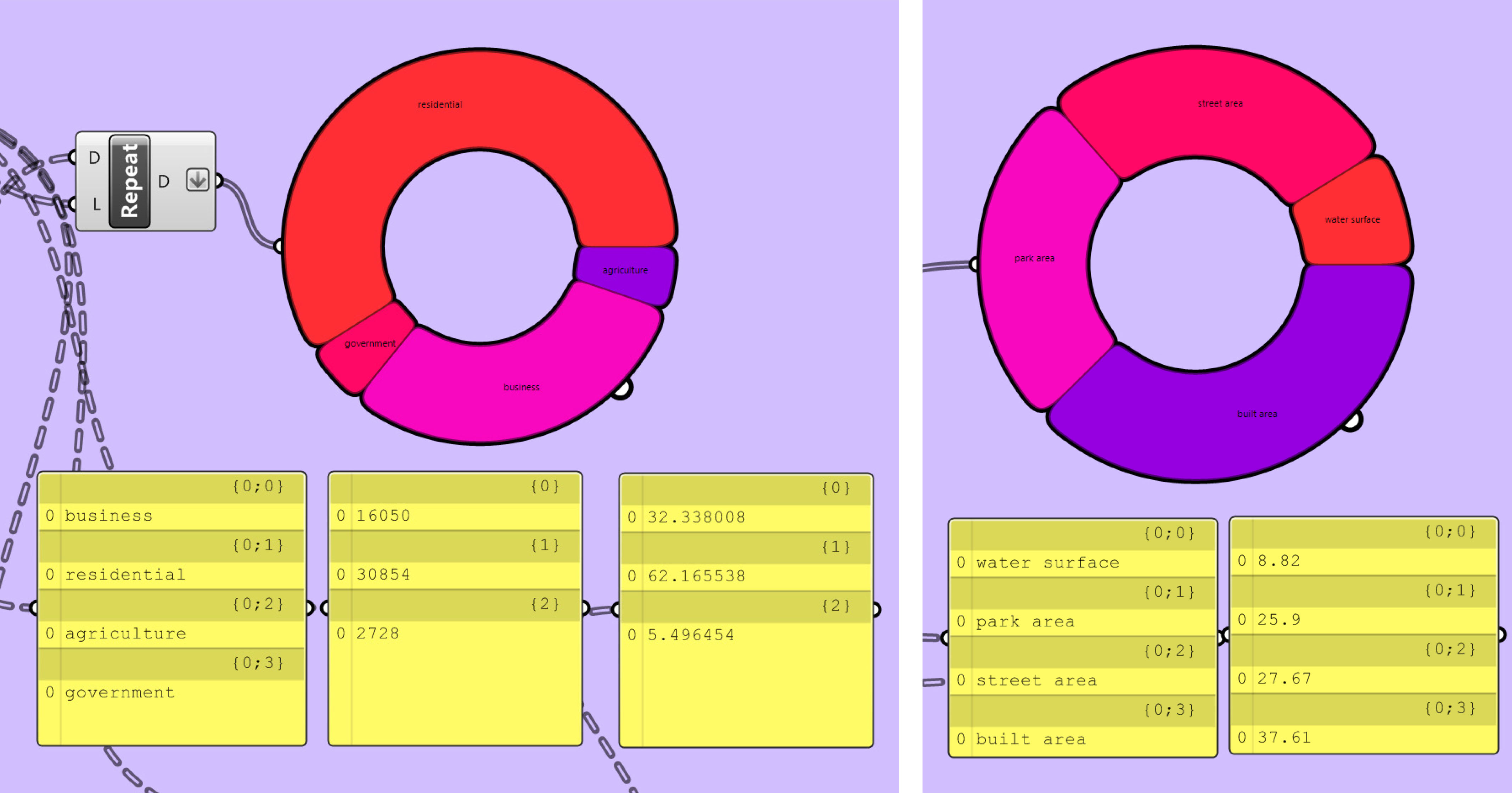